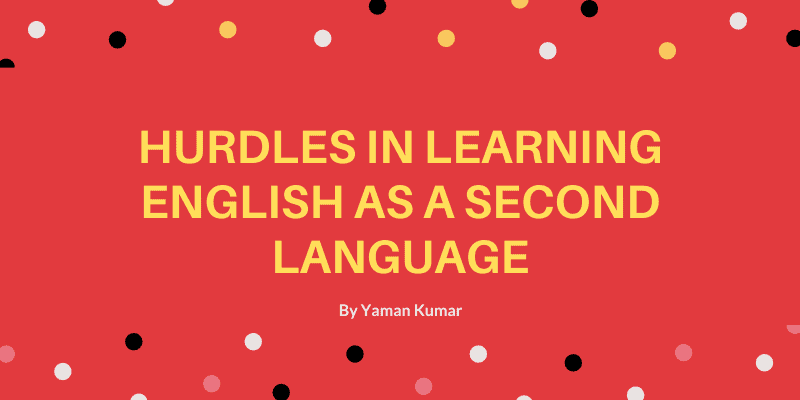 Before starting the treatment, the causes of a disease must be ascertained and examined thoroughly. That would help to understand the nature of disease, and suggest the right line of treatment.

It is observed that there are five major hurdles in learning English as a Second Language which are, usually, faced by the English language aspirants:

A thorough study of traditional English grammar suggests that it is more confusing than comprehensive. Most of the grammar rules are progressively discarded one after the other when a student reaches to the peak of the language with acceptable good command over written and spoken English. Interestingly, confusion continues to prevail right from Ist standard to post graduate level.

Grammatically speaking each word has got a specific place and purpose in a sentence. It’s use in a sentence must be correct syntactically as well as semantically. The expression which is widely used by English speaking society in a particular context can be called standardised expression. If you

Translation is the common pitfall for second language learner. When they are not able to get the right word/expression, they tend to indulge in literal translation of their thoughts which, usually, comes in mother tongue, into English. Two languages may be same at thought level, but at word level they may require all together different expression in their respective languages e.g.

1. He drinks cigarette-(incorrect) (it is literal translation of Hindi vo bidi peeta hai)

Whether it is mother tongue or the second language, exposure is inevitable to have a command over the language. In the absence of exposure, mind tends to pick up something without understanding it properly. It leads to confusion, and state of no-confidence.

In case of English as a second language, exposure helps to know the standardised expressions. lt also provides an opportunity to practise the acquired knowledge. The company of the people who speak English, helps you to check your own knowledge of English; it helps you to know the common and standardised expressions, it provides you an opportunity to interact, and practise your English on somebody.

Thus, lack of exposure is big impediment in learning English. Mind you, people are the right source of learning a language.

Yaman Kumar is a digital marketing trainer and Digital Marketing strategist who has worked with a plethora of companies and startups.

How to speak English? (Part-2)

How to speak English?